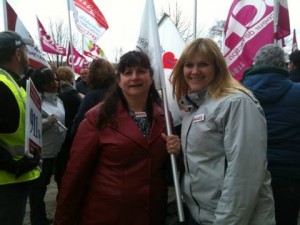 Delegates Paul Del Motte, Alana Estabrooks, and Lorena LeBlanc had the privilege of representing CUPE 3433.We attended all convention sessions and a couple of additional breakfast meetings. We participated in discussions and voted on regulations that established new union priorities, polices, and the election of Provincial Leadership Positions. (Executive and standing committees) This was a very long process but Alana found the colour coding of Ballets was good idea to bring back to our union to speed up and add another security feature to our voting process here.

National President Paul Moist and National Secretary Treasurer, Charles Flury delivered Personal Office Reports and spoke of the achievements and struggles CUPE and all trade unions are having across Canada. The President also arranged a breakfast meeting to discuss Economics. He believes the people and manpower are N.B.’s greatest asset. He disagreed with the cutting of Public Service jobs by the government and feared the loss of paychecks, would adversely affect families, and communities and contribute to further loss of tax funds to the province. Group Home workers and Correctional Officers are the lowest in Canada.

Unite for Fairness Campaign was presented by Kathy Johnson from National.

This was implemented in response to a lack of Union member involvement in meetings and to educate everyone on their Union history and how unfair workplaces were without them. To remind them of the gains that were established in Collective Agreements by earlier generations that are in peril today. What is the legacy we are leaving for the future generations? It is asking all union members to become active and engaged in the labour movement. Silence and acceptancy is not the way to keep what rights we have.

Paul found the big topics were the Pensions, and Collective Bargaining

The CUPE president from Quebec gave an overview on Public Child Care and by all accounts it is finically and socially a success for the province. At the Child Care Breakfast we learned of the challenges facing young mothers and families in accessing good safe day care at affordable prices. N.B. is involved in spreading the Rethink Day Care campaign.

I was very interested in the Domestic Violence against Workers and Anti Bullying in the Workplace, the Health and Safety in the workplace campaigns and Pay Equity in New Brunswick.

We joined in protest with the Correctional Officers on the grounds of the legislator. Alana and I went to the Cowboy dance in full support of the social committee and had a great night kicking up our heels.

We all traveled in the one car and I shared a room with Debbie from CUPE 2338 to help keep costs to a minimum. I picked up lots of material and will pass them out. When you are finished reading them please pass them along or leave them in the staff rooms for others.

All in all, we had a great time and learned a lot about being a member of CUPE.